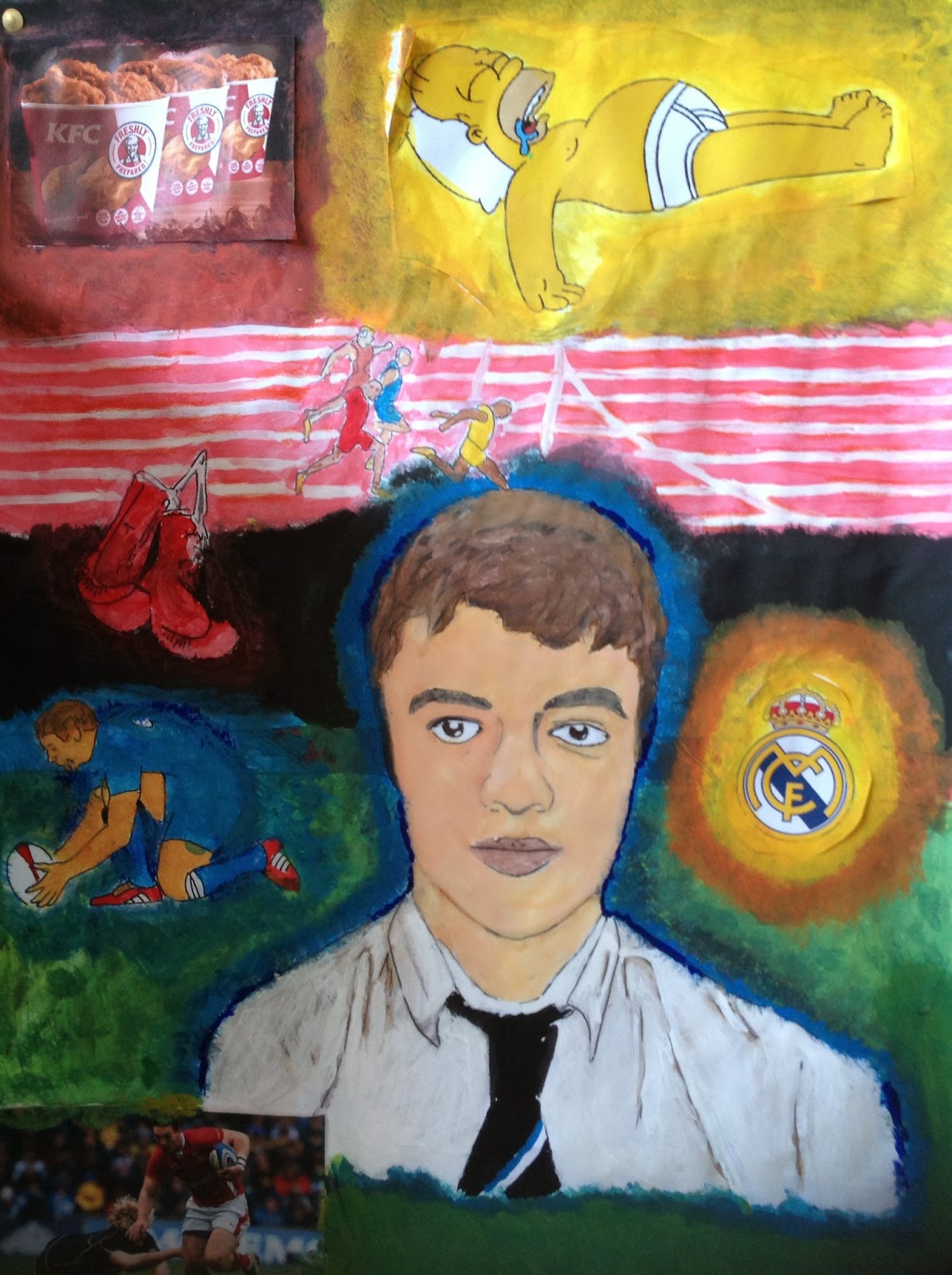 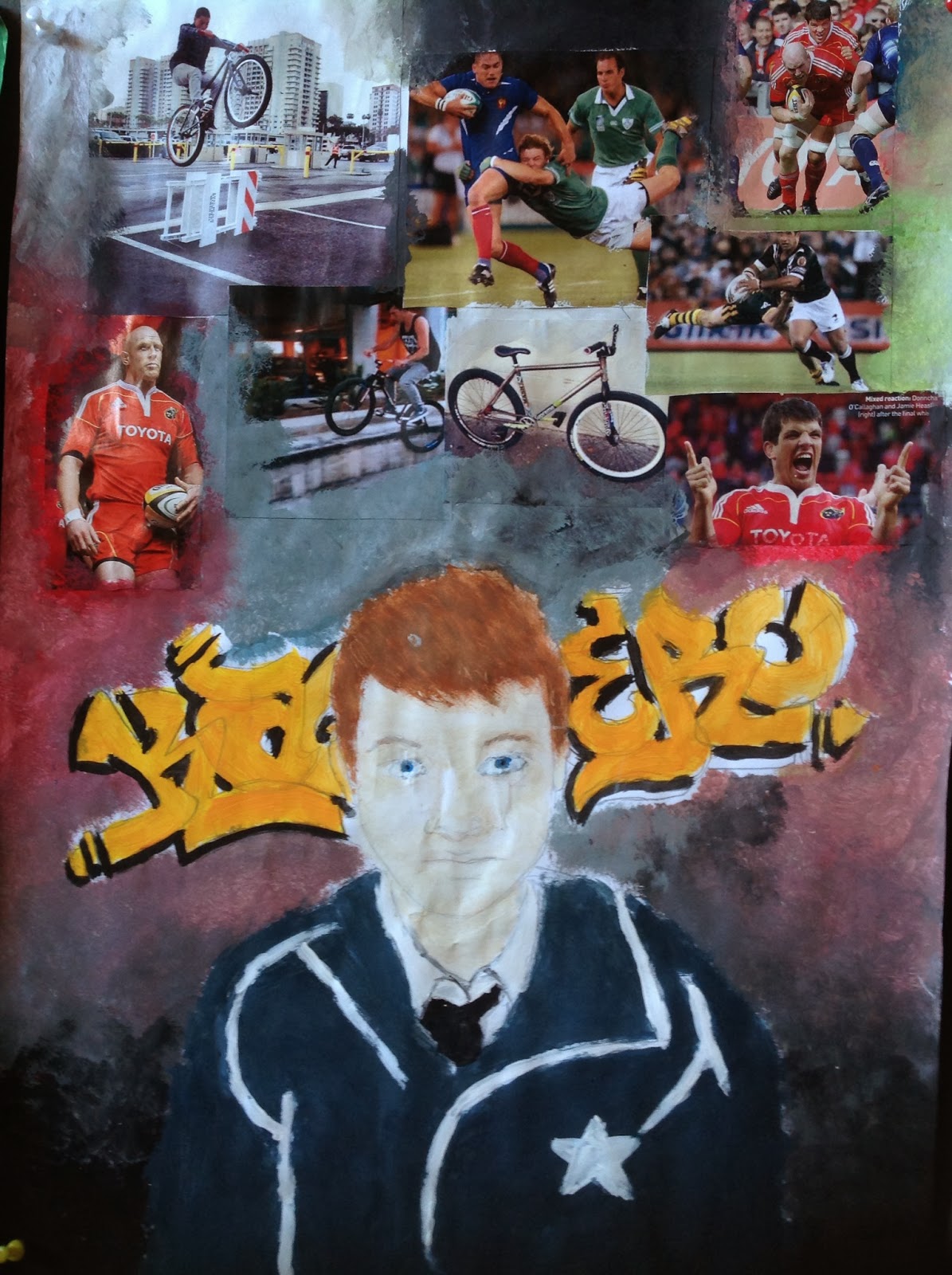 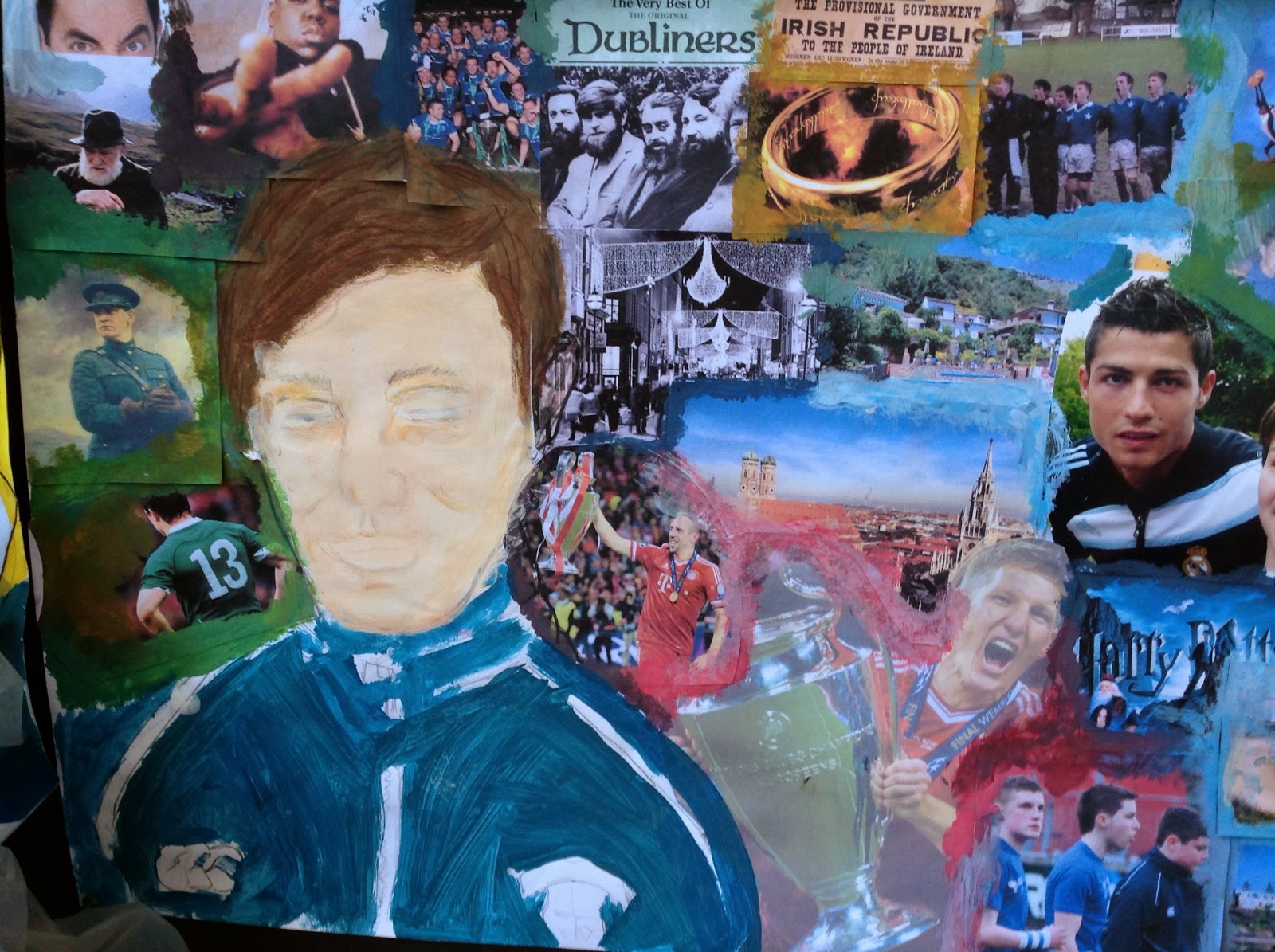 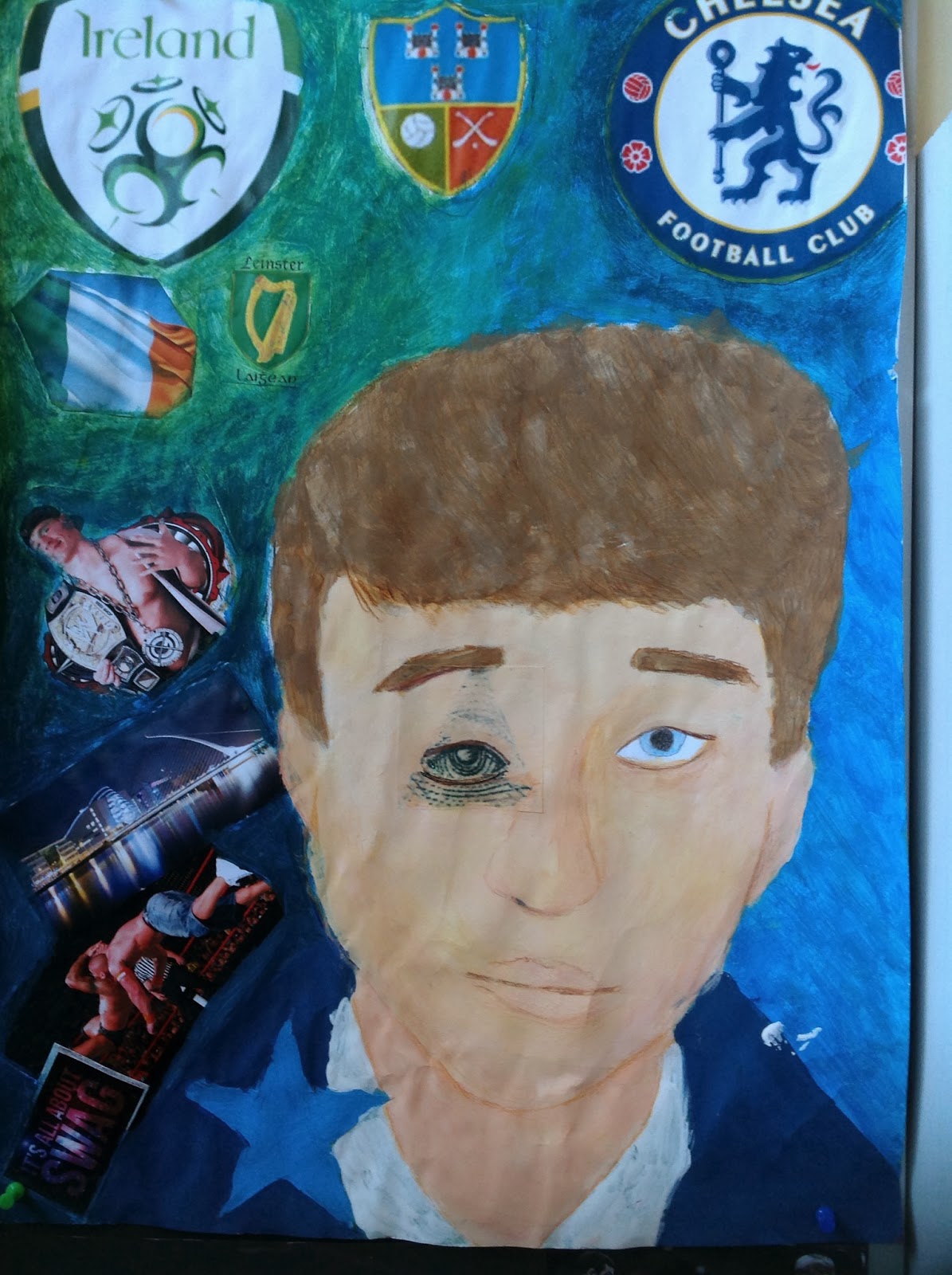 As part of the Art History element of Transition Year Art, the TY students are each researching artistic movements, artists and artworks, while working in groups and all groups are then presenting their work as a form of peer learning.  We have had some very interesting discoveries relating to their artists so far, well done to all.

click on the link below to view information about Edgar Degas and Impressionism, the information was compiled by Niall, Charlie, Colm and John, Well done.
Impressionism Powerpoint

The name of the style comes from one of Claude Monet’s works called ‘Impression, Impression, Sunrise.

The characteristics of impressionism are thin yet visible brush strokes with emphasis on the way the light was made and how it changed during the day.
Ordinary subject matter was used and there was movement within the paintings, giving them an element of human perception and unusual angles.

Unfortunately due to ICT issues we could not view the powerpoint from our final group in todays class, but thank you to Óisin for his notes.  I have attached a link to the powerpoint below.  Well done to other members or the group also, Nick, Ronan and Sean.
Post Impressionism Powerpoint
Aim of post impressionists: Although they worked theses traditional elements into their paintings , they didn’t always use them in conventional ways. Backgrounds were sometimes painted in an abstract manner with colour , line  and pattern used to create an atmosphere in the picture instead of simply representing the actual reality of the scene. Different viewpoints were also used to create interesting and innovative compositions.
The Post-Impressionists  were never a formal group or movement, even though some worked in close proximity with each other. Each artist was very individual in style and technique, their outlooks on life and in their subject matter , even though they were all united in their desire to explore colour, line, pattern and form in their work. 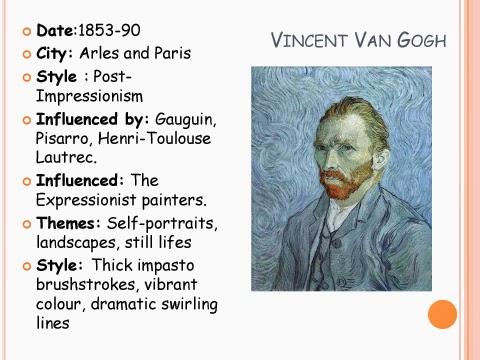 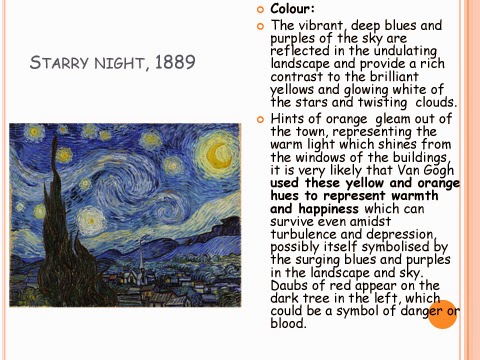 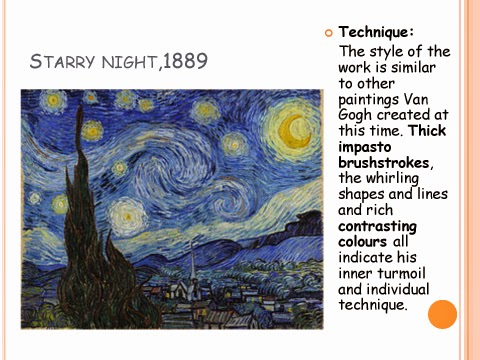 Below you can click on the links to download todays presentation by Eoin, Shane murray, Michael and Shane McGrath, this powerpoint has information on pointillism and Georges Seurat.
Seurat Pointillism Powerpoint

Pointillism is a technique of painting in which small dots of pure colour are applied in patterns.  When viewing the image up close, one can only see dots, however when you stand back from the painting, the dots appear to merge to form an image.  Light colours are painted beside dark colours to form tone, dots of yellow and blue, when painted together, appear to merge and form a green colour when one stands back from the painting.

Well done to Brian M, Ross & Bryan on their presentation today, click on the link below to view their powerpoint with information about expressionism and Edvard Munch.

}Expressionism is a style of art that is highly charged with an emotional or spiritual vision of the world
}The 'self expression' in the art of  Vincent Van Gogh and Edvard Munch inspired Expressionist artists in the 20th century. 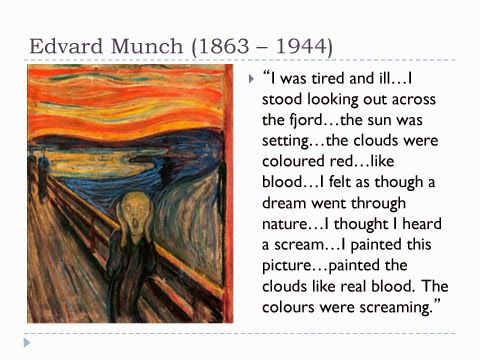 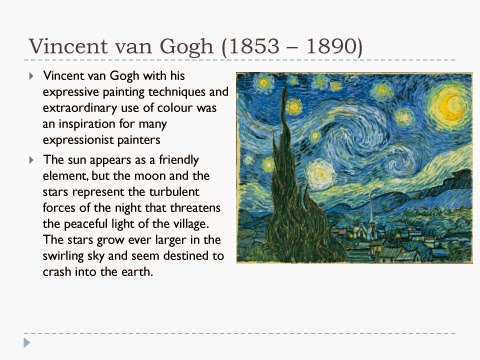 Well done to Brian O'M, Alexei, Derry & Alex on their excellent presentation today, click on the link below to view their powerpoint, it will help you when you are studying for the art history exam at the end of the module.

Cubism involves analysing an object, breaking it up and reassembling it in abstract form, instead of seeing an object from one viewpoint, the artist depicts it from a number of viewpoints to display it in a greater context, the artwork almost becomes 4D.

Below you can click on the links to download todays presentation by Matthew, Thomas & Mark, the first outlines the surrealist movement and the second is based on Salvador Dali.  we will also have some other information about the painting which will be added later in the week, well done all.
Surrealism Powerpoint
Dali Powerpoint 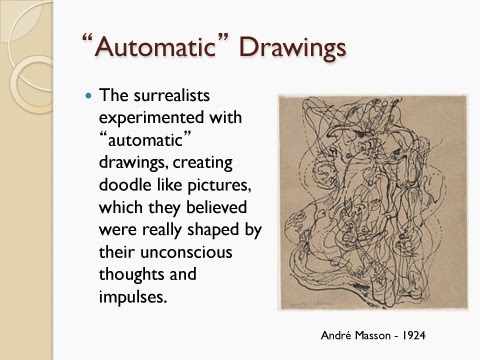