Introduction to the Romanesque

The Romanesque period was the first major art and architecture movement in Europe following the ‘Dark Ages’.
The word ‘Romanesque’ was a 19th century term historians created to describe the style of the period, forever linking it to the ancient Roman aesthetic and roman basilicas.
The up-surging power and dominance of the Roman Catholic Church.
Importance of pilgrimage routes – the enormous surge in building was due mainly to the need for churches along the main pilgrimage routes to Santiago de Compostela.
The dreaded year 1000!

Ancient Roman Basilica’s served as the architectural blueprint on which Romanesque Churches developed.
The Basilica was the beating heart of the ancient roman community. The Early Christian’s wanted to replicate both its architectural format and its social importance.
Cluny Abbey, France is regarded as the first ‘Romanesque’ church to be built.
It was the largest church ever built and remained so until the 17th Century.

•Rounded Arches – used on doors windows and as ornamental arcades on walls. 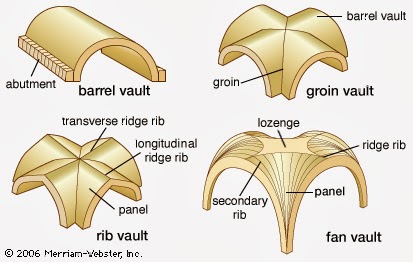 •Barrel vaulting was the first method tried, but the heavy stones pressed out as well as down, causing the semi-circular arches to flatten, the walls to push outwards and the roof to collapse.  This problem is known as outward trust.
•Groin vaulting was a further experiment in finding a solution.  This consisted in two barrel vaults intersecting at right angles.  For a while it seemed as if this approach provided a solution, but the problem of outward trust continued to plague builders for a century after.
Cruciform Shape
•Romanesque churches were designed to cater for large crowds of pilgrims.
•Crosswise transepts broke up the long nave and pilgrims could walk around the entire church without interrupting the monastic liturgy.
•An ambulatory or walkway around the back of the alter facilitated viewing relics.
•Radiating chapels (a ring of small chapels) extended from the ambulatory and each of these contained a minor relic.
•A dome over the crossing lit up the the central area of the church with the effect of drawing pilgrims toward the alter. 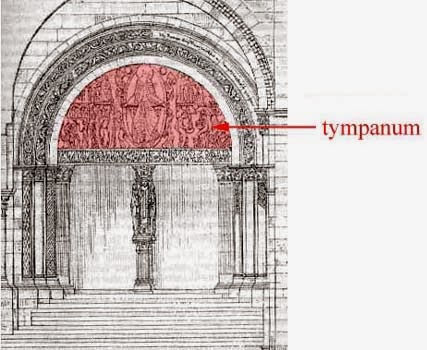 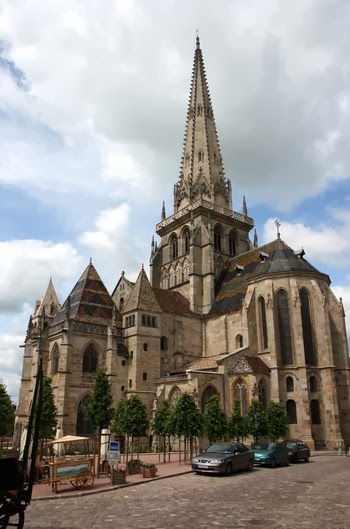 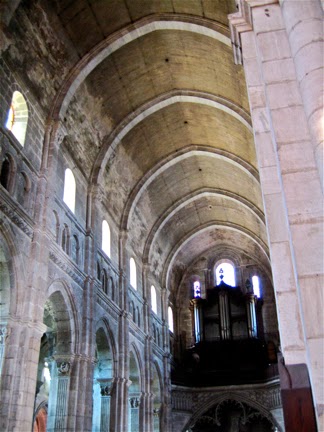 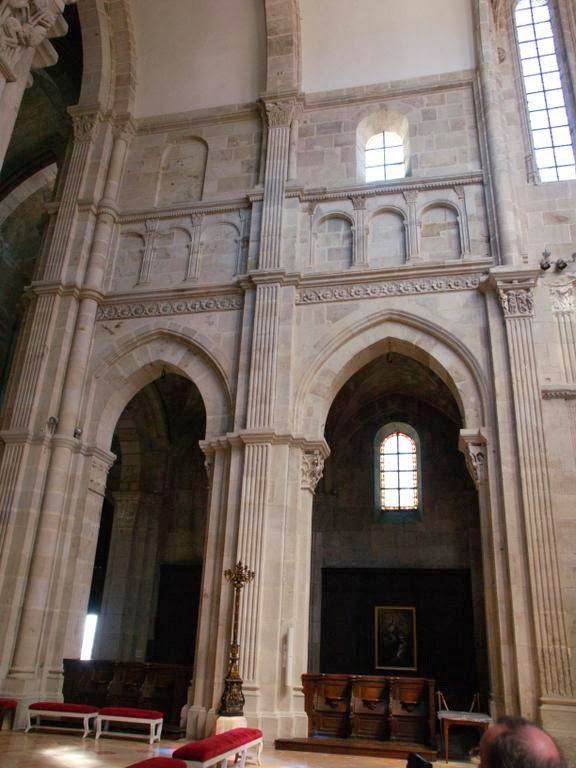 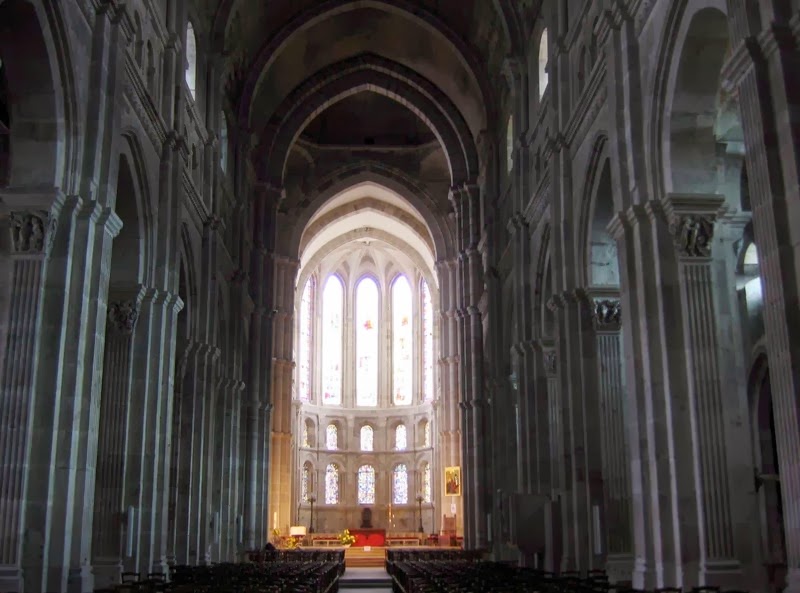 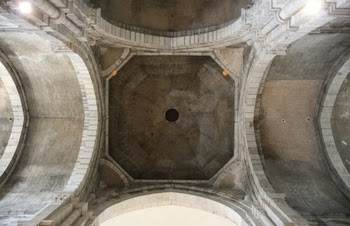 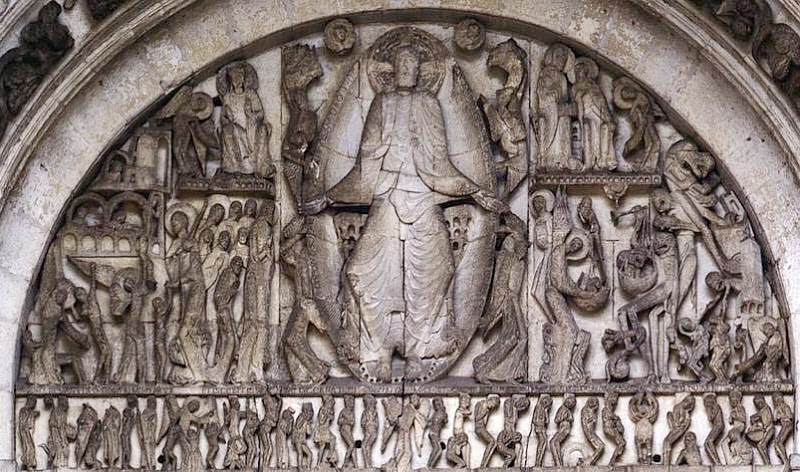 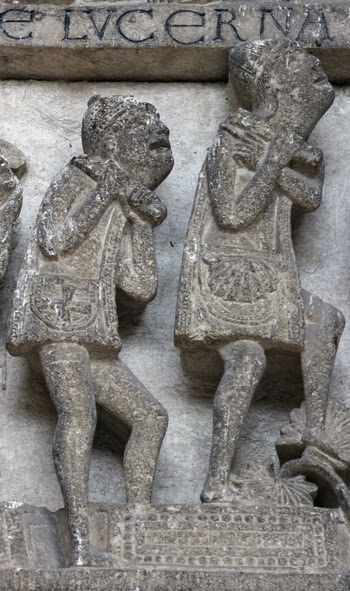 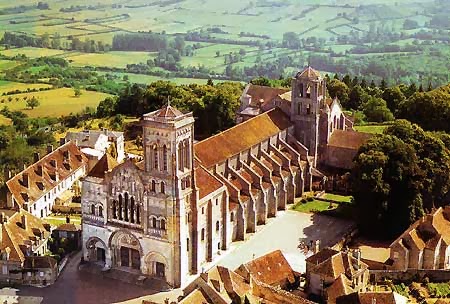 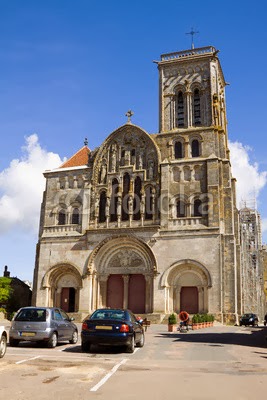 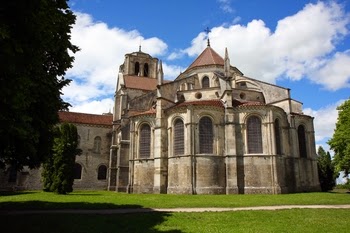 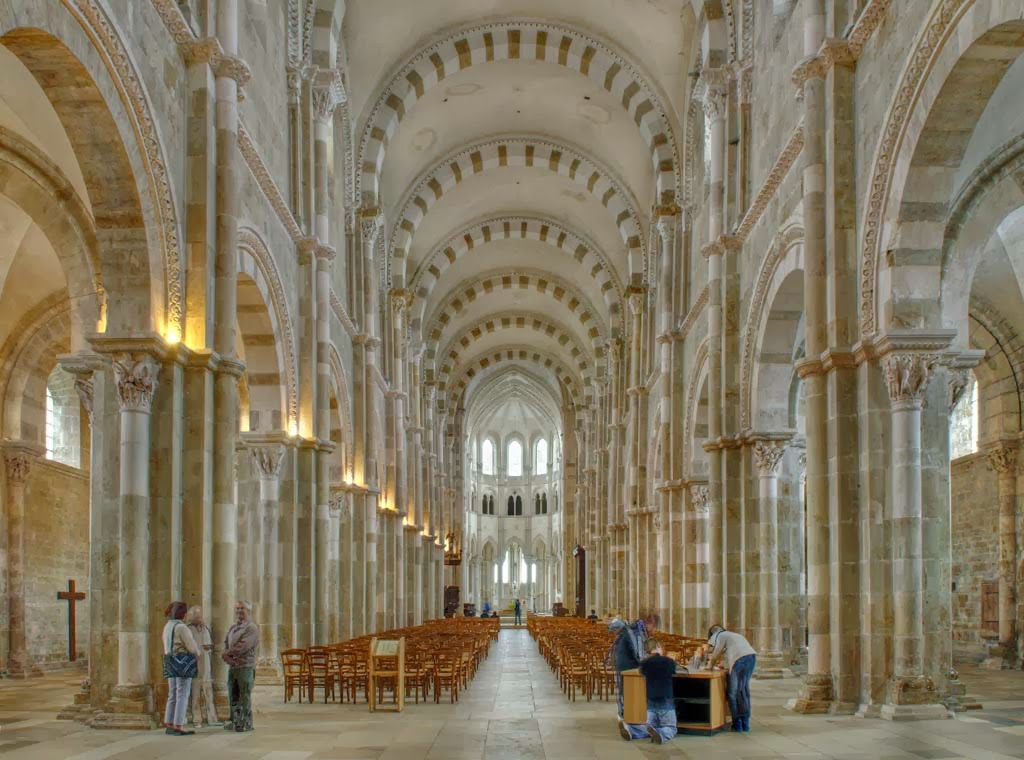 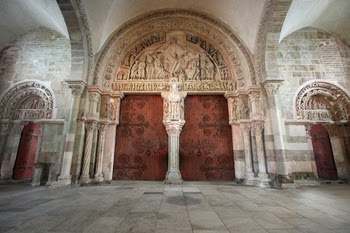 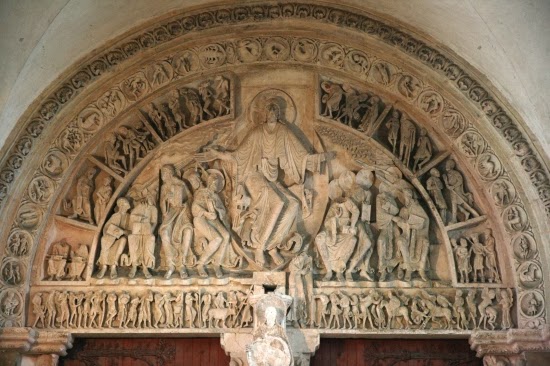 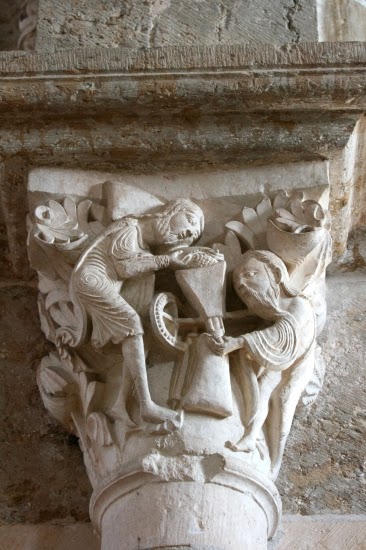 
The design possibilities of new building techniques united art and architecture in the churches and cathedrals of the Gothic period.
Discuss this statement with reference to one named Gothic church or cathedral that you have studied. Refer in your answer to techniques, structure and decoration.
and
Briefly describe and discuss the treatment of the human figure in one named Gothic sculpture. Illustrate your answer.


The scenes of judgment and damnation found in Romanesque sculpture contrast greatly with the more serene imagery used in Gothic sculpture.
Discuss this statement with reference to one named example of Romanesque sculpture and one named example of Gothic sculpture. In your answer refer to subject matter, composition, style and treatment of the human figure.
and
Briefly describe and discuss the main features of Gothic architecture.
Illustrate your answer.


The artistic imagination and skills of Romanesque sculptors allowed images of life, death, judgement and the afterlife to be central to the churches and cathedrals of the time.
Discuss this statement with reference to a named Romanesque church or cathedral you have studied.
And
Briefly describe and discuss the main architectural features of Romanesque architecture.
Illustrate your answer.


2015 – Gothic Architecture & sculpture
The creators of Gothic churches and cathedrals used architecture, sculpture and stained glass to communicate ideas about the power of the church as well as about the story of Christianity. Discuss this statement with reference to a named Gothic church or cathedral.
and
Briefly describe and discuss the treatment of the human figure in a named Gothic sculpture.
Illustrate your answer.


2014 – Gothic sculpture & architecture
Name and discuss the sculpture illustrated on the accompanying sheet, making reference to the sculptor, theme, composition, style, and the period in which it was produced.
And
Name a cathedral from this period and briefly describe and discuss its main architectural features. 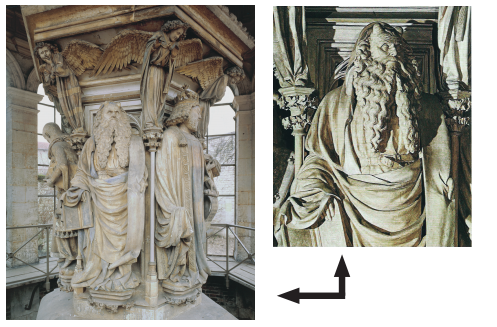 Name and discuss in detail the two sculptures illustrated on the accompanying sheet, making reference to the periods in which they were produced, and to their themes, composition and style.
and
Discuss briefly the role of sculpture in a named medieval church/cathedral that you have studied.

2010
The Christian church influenced the development of art and architecture during the Romanesque period. Discuss this statement making detailed reference to the structure, layout and decoration of one named church from the period.
and
Name and discuss briefly one example of Romanesque sculpture that you have studied.

(a) Describe and discuss the characteristics of Gothic sculpture and its relationship to the architecture of the period. Use specific examples.

(b) How does Gothic sculpture differ from the sculpture of the Romanesque period?
Use specific examples.

2004
In Europe, crusades, pilgrimages and monasticism contributed to the development of Romanesque art and architecture. Discuss this statement, referring in your answer to two specific Romanesque churches and to the origins, development and characteristics of the Romanesque style.