The Iron age is the period in Irish history about which there is most speculation and least certainty.
This period was influenced by the La Tene culture and the Celts, who travelled to Ireland from Europe, bringing with them there skills in metalwork and decorative elements in artwork.
The Iron age in Ireland occurs circa 500BC – 400AD.
The Iron age in Ireland was particularly common in the north and north west of the country.
At this time, Iron was the main metal used to make weapons as it was very strong, these included knives, axes and functional objects such as cooking utensils.
However bronze and gold were still used during this time because these metals do not rust or decay like iron.

The La Tene culture got its name as some of the Celtic people came from an area known as La Tene near Lake Neuchated in Switzerland.
A common ritual/characteristic of the culture was to throw objects into the lakes as a ceremonial offering.  La Tene was a prime example of a European Celtic site, with a great deposits of weapons and other objects found in the lake.
The La Tene style and culture reached as far as the Mediterranean and the east, including Greece, this has influenced the style of artwork associated with this time.

The artwork from this time was varied but repetitive and very decorative.
Motifs were influenced by Eastern and Greek ideas – with an emphasis on plant forms, honeysuckle, and flowing tendrils.  They were blended together to form a distinctive style of abstract and curvilinear patterns.  This style was known as the Waldalgesheim style.

Later in the iron age there was a change in the style of design:
The patterns became lighter and more symmetrical.
The vegetal designs of the insular style gave way to more geometric styles of ultimate La Tene – tis continued into the Christian era. 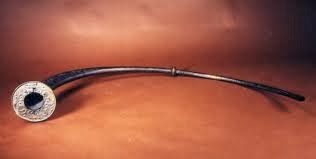 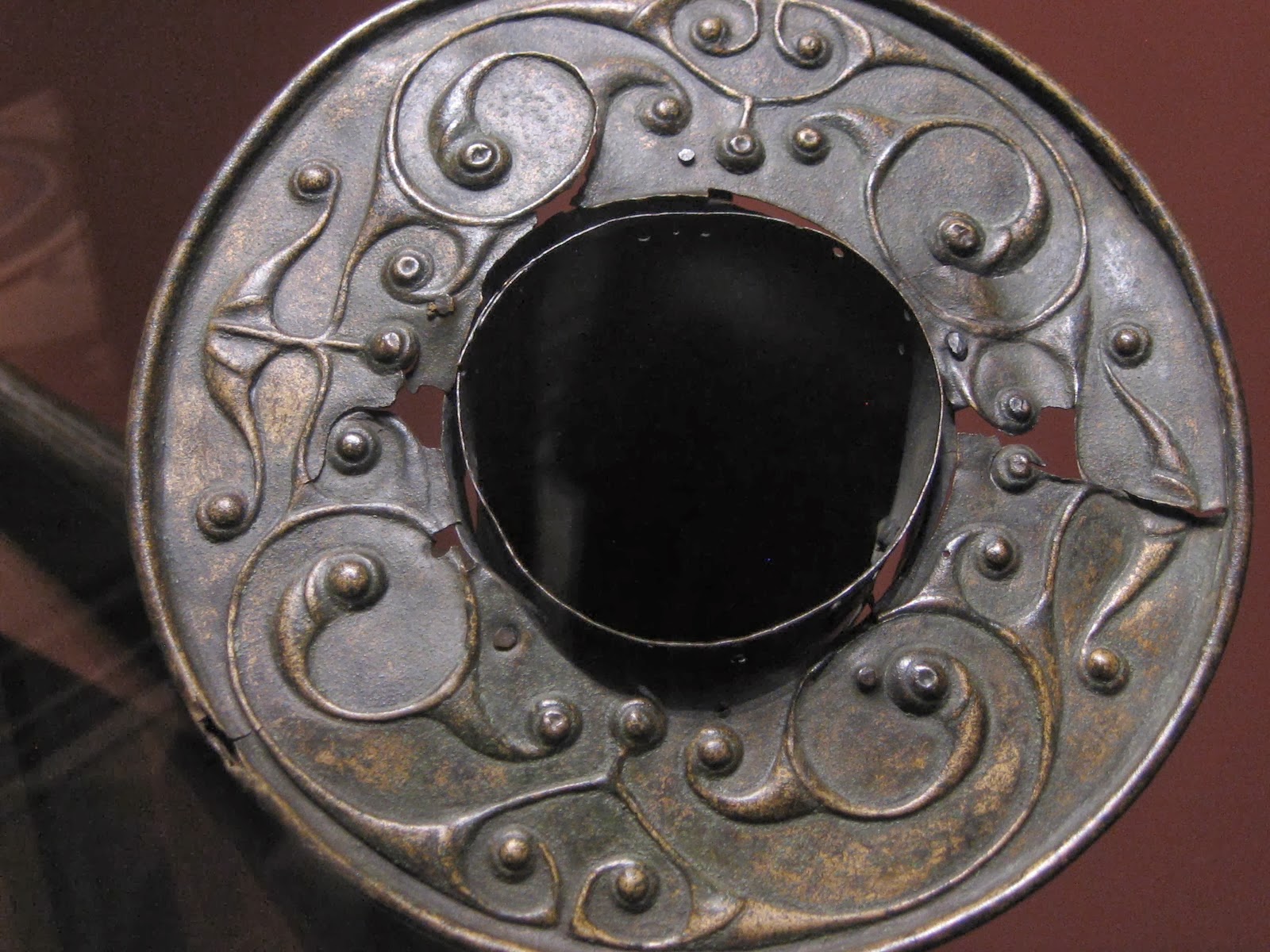 Period: Iron Age
Form: it is made from two tubes of sheets bronze joined by a knob in the middle.  It has a decorative plate/disc attached to the end.  This design is lighter and more linear than earlier work.
Function: it was used as a trumpet, to create sound perhaps during rituals or before going into battle.
Location:  found in Loughnashade Co. Antrim
™Decoration: The mouthpiece is decorated by a rimmed circular disc.  The designed excuted in Repoussé, and consist of a four part pattern of linear curves.   The spiral bosses are in high relief, with large spirals ending the curvilinear forms.  It is based on the roman pelta motif and is almost perfectly symmetrical.
™The lotus flower has links to Egypt and is included in the motif.
™The circular diac has broader areas in relief at the ends of the curves.
™
™Technique: The curved trumpet was made by rolling a tube of bronze and reviting the sides to a strip of bronze on the inside. 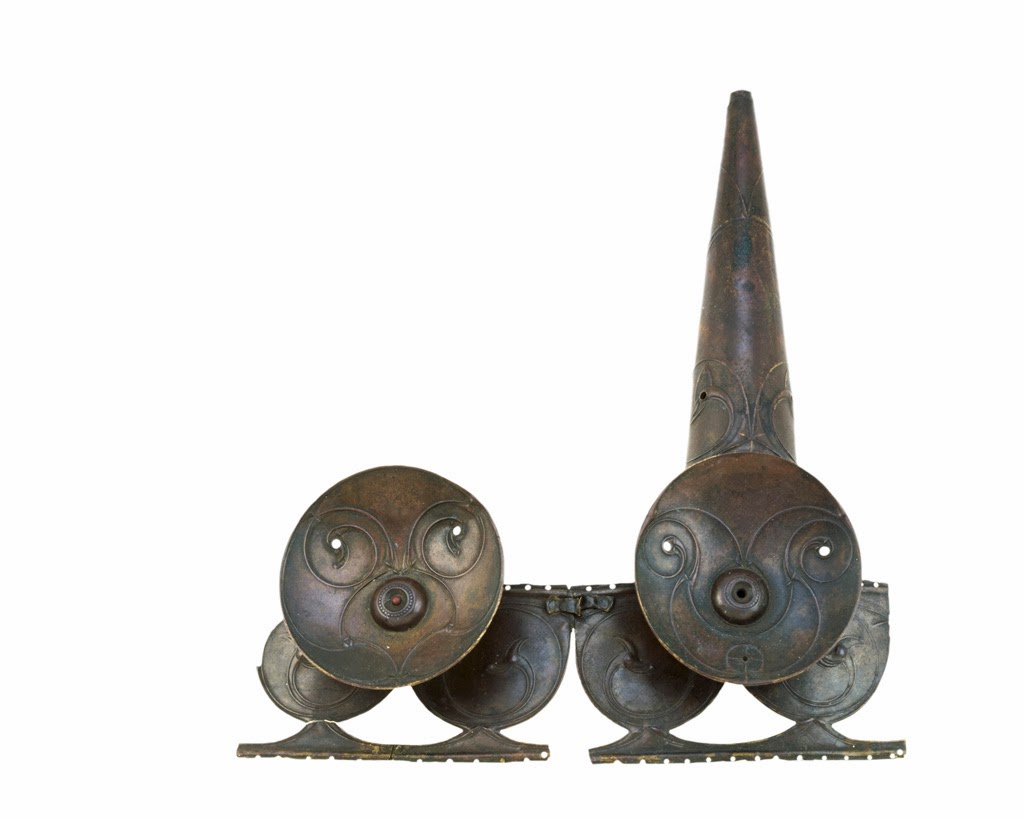 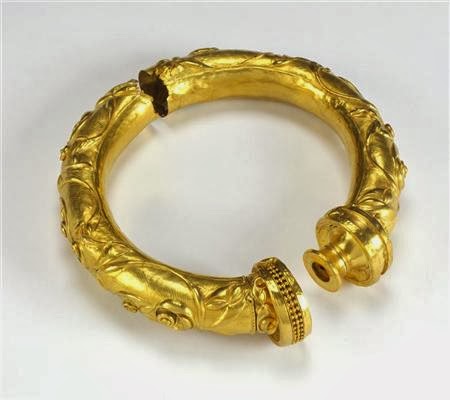 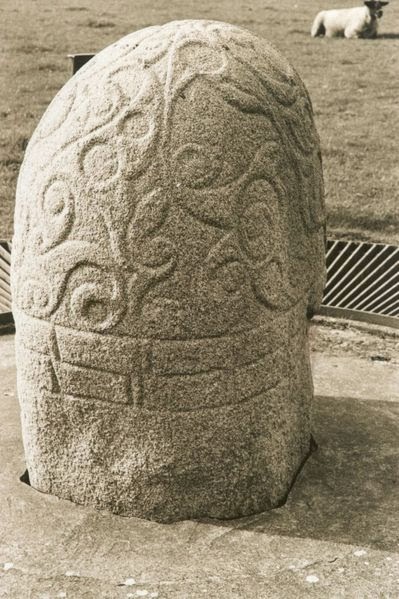 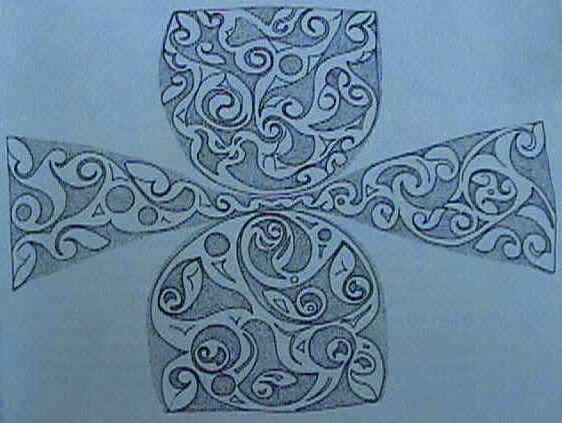 The La Tene culture – The Celts
European, Eastern and Greek influences
™Ornamental work was abstract ,decorative and had curvilinear patterns
Motifs included plant forms & trumpet forms
Iron was used for implements and weapons
NEW TECHNIQUES: Soldering and Enamelling
In easiest terms, Enameling is the fusing of glass to metal under high heat conditions.
Soldering is a process in which two or more metal items are joined together by melting and flowing a filler metal (solder) into the joint, the filler metal having a lower melting point than the workpiece.


METHODS OF DECORATION:
Repousee – hammering a design on the reverse of the iron