The first metal that mankind widely used was bronze, an alloy of Copper and tin.

Repoussé – Design beaten up from behind.
Incised – design cut into
Twisting – metal twisted.

The technique for moulding the bronze improved during the bronze age.
Initially items were cast by pouring the bronze into a hollowed out stone.  When removed, this axe head would have been attached to a wooden handle at its narrow end, while the wide end would have become the blade.
By the middle bronze age, people had invented two-part moulds, where 2 hallowed stones were put together and liquid metal poured into the gap at the top.  This allowed more complex items such as daggers to be produced.
By the end of the bronze age, people were making wax or fat models of what they wanted to cast, putting clay around them and then heating the clay to melt the wax.  They then poured in the metal and chipped away the clay once it had set. 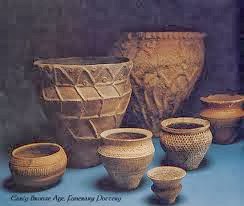 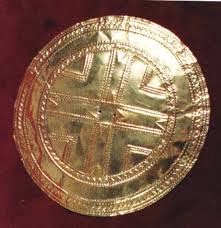 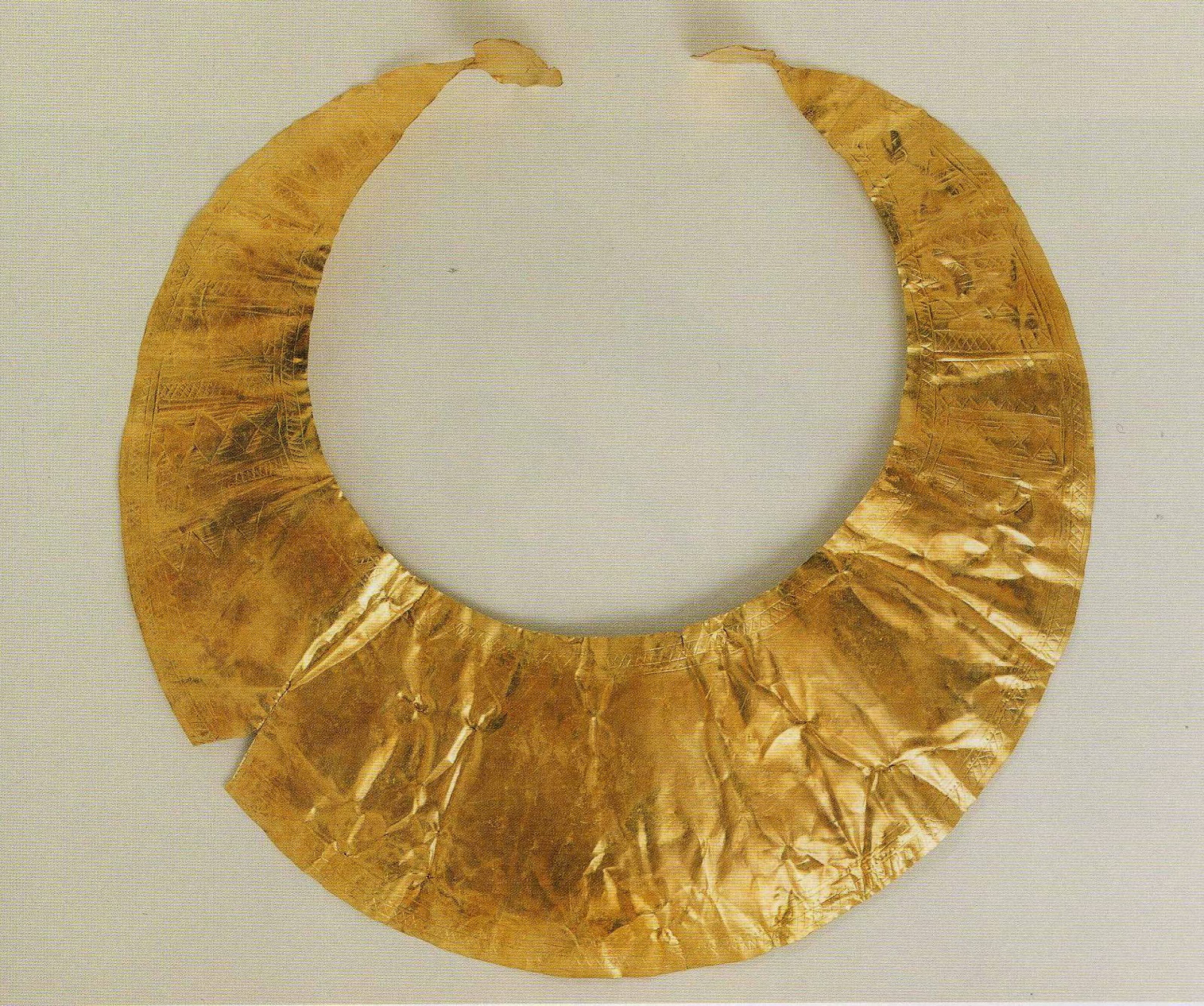 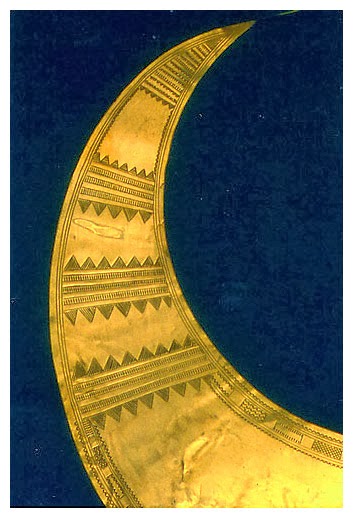 Period: middle bronze age
Form: twisted gold flanged torc, small in size with fastening clasps made from gold wire.
Function: worn as jewellery to show status and wealth.
Decoration: the decoration of the earrings is attained through the twisting of the flanged gold bar.
Technique: firstly a square sectioned piece of gold bar would be hammered out.  Then the flat faces of the bar would be hammered to emphasis the corners, creating flanges.  The bar was then twisted to create the design.  The clasps were made from gold wire. 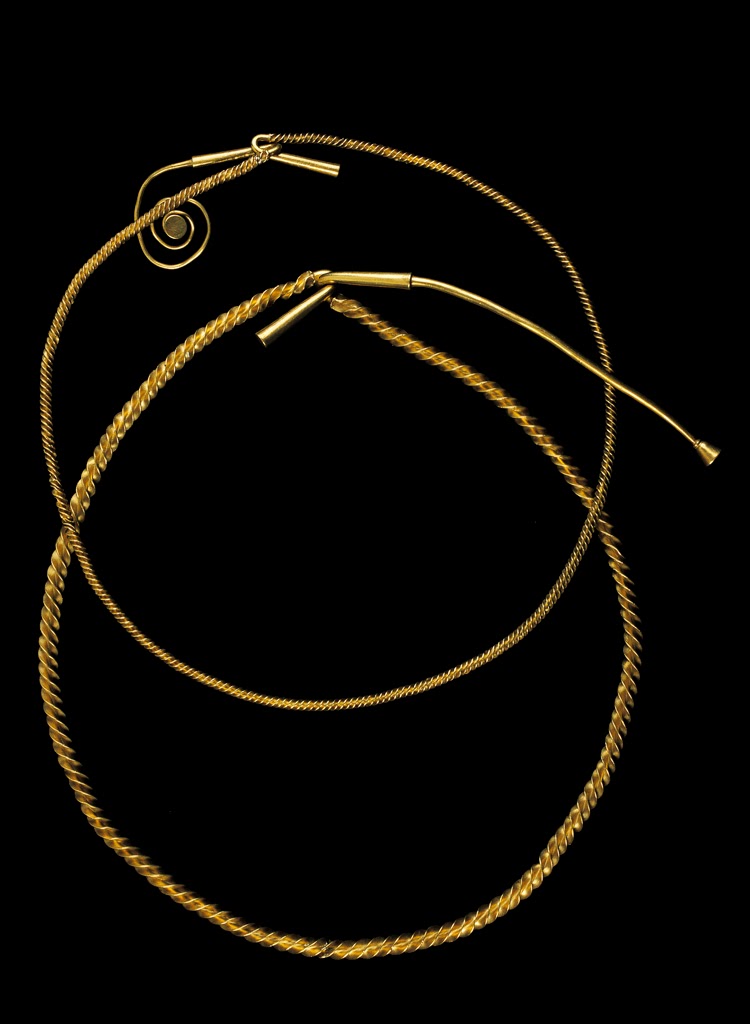 Period: middle bronze age
Form: long twisted gold flanged torc with elaborate hook like clasps.
Function: worn as jewellery around the waist, perhaps used to fasten clothing.  Worn as a sign of status and wealth.
Decoration:  the decoration is attained through twisting if the flanges gold bar.
Technique:  firstly the square sectioned piece of gold bar would be hammered out.  Then the flat faces of the bar would be hammered to emphasis the corners, creating flanges.  The bar was then twisted to create the design.  The hook clasps were rounded and bent into shape of the design. 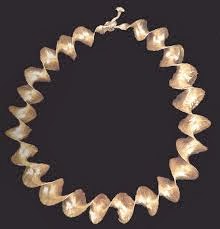 Period: middle bronze age
Form: twisted flat gold bar with hook clasps to fasten the piece.
Function: worn as jewellery around the neck as a sign of status and wealth.
Decoration: decoration is attained through the uniform twisting of the flat gold bar.
Techniques: firstly a piece of gold would be hammered into a flat thin rectangular strip.  The strip would then be twisted uniformly to create the ribbon effect.  The ends of the strip would be hammered into rounded hooks for fastening.

This phase got its name from a hoard of objects dating from this time found in Dowris Co. Offaly.   The hoard consisted of roughly 200 times ranging from axe heads and swords to horns and a cauldron. 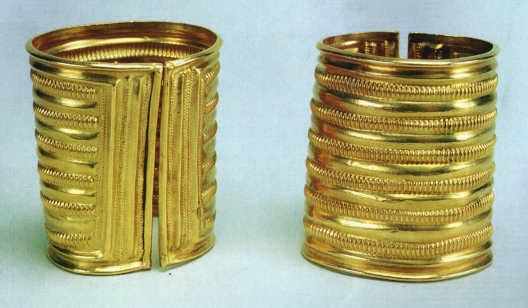 Period: late bronze age
Form: cylindrical bands of gold which are not completely closed.
Function:  jewellery worn to show wealth and status.  These would be worn on the wrist.  The design could have possibly originated from protective armor worn by warriors.
Decoration:  thin ridges of geometrical patterns flowing around the band.  The outer edge of the piece has a raised lip.
Technique:  gold would be hammered until very thin and then cut into a rectangular shape.  The decoration was applied using the repoussé technique.  The gold sheet was then bent around a cylindrical form.
Location: Derrinaboy, Co. Offaly 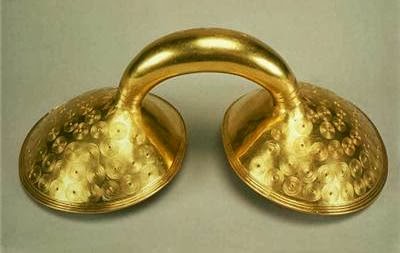 Period: late bronze age
Form: 2 disc or cup like shapes joined together with a gold bow of handle made from approx 1kg of Gold.
Function:  it was most likely worn as a dress fastener.  Due to the weight of this fibula it was not practical for everyday wear and was probably reserved for ritual.
Decoration:  the surface is finely polished.
There are four rows of concentric circles on three quarters of the cup’s surfaces containing a single punch mark at each centre.
The surface of the cups underneath the bow is undecorated but polished.
The perimeter of the cups are decorated with rings in a step like fashion.
Where the bow joins the cups where are chevrons and parallel lines encircling it.
The bow itself is finely polished without design.
Technique:  the piece was cast using the lost wax method.  In bronze age times animal fat may have been used instead of wax.
After casting the piece, it would have been polished before the designs were made using the incision technique.
Location: Clones, Co. Monaghan 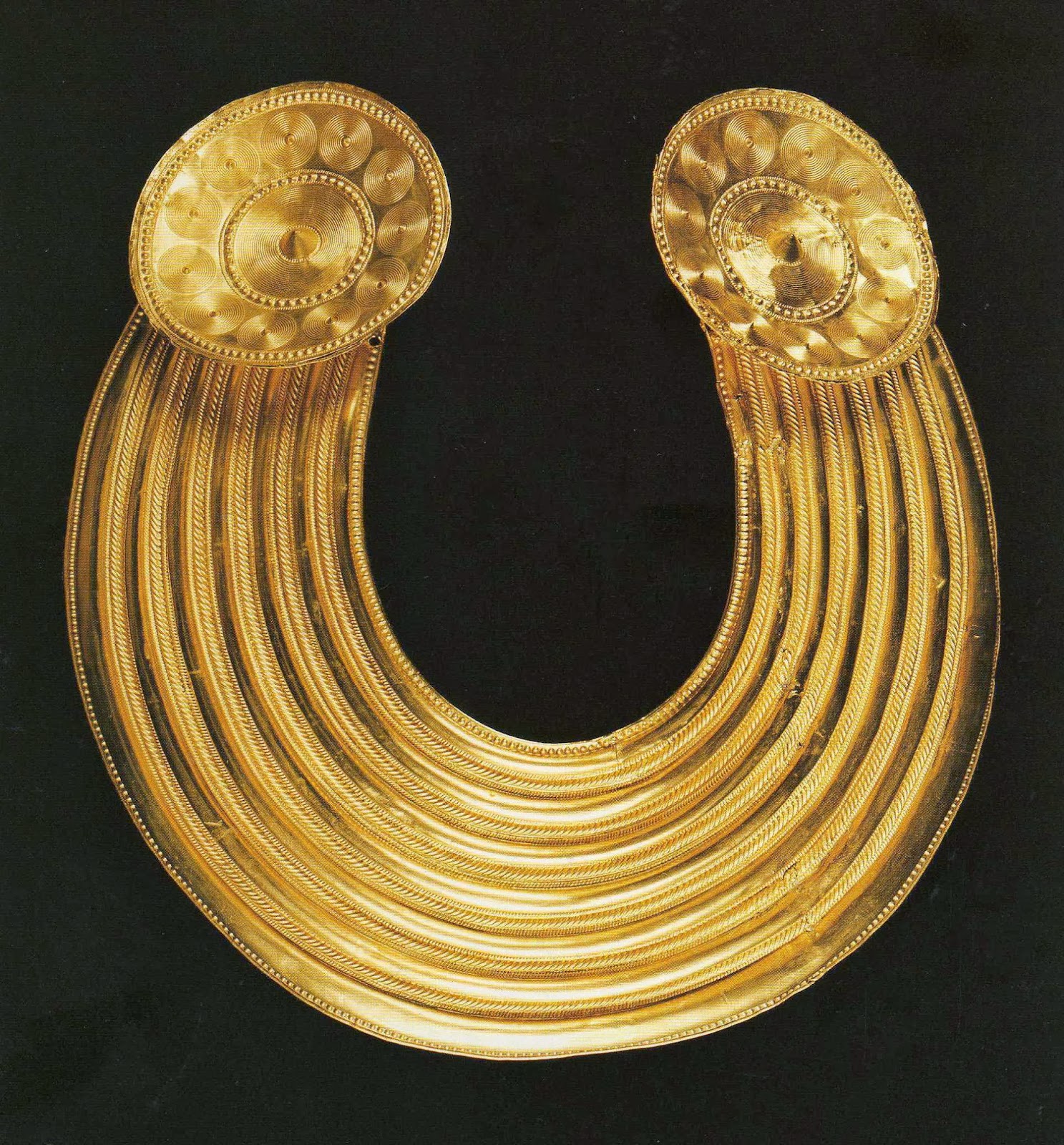 Period: late bronze age
Form: cresent shaped gold sheet with two attached concave gold discs.
Function:  jewellery worn around the neck as a sign of wealth and status.
Decoration:  the crescent shaped part is highly decorated with six Repoussé ridges of rope with rows of beads on either side.  The edges are folded backwards to give a clean edge.
The outer edge of the concave discs are decorated with Repoussé beading.  There is a row of incised concentric circles with dot marks at the center.
At the center of the disc is a larger Repoussé point.
Technique:  firstly gold was hammered in a thin sheet and then cut into the cresent and disc shapes.  The discs were hammered into a concave shape.  The decoration was added using both incision and Repoussé technique before joining the pieces together using a type of biscuit joint and securing with gold wire.
Location: Glenisheen Co. Clare 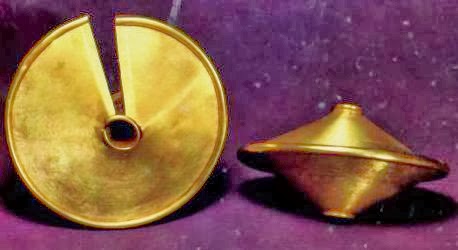 Period: Late Bronze age
Form: each lock ring consists of two cone shapes of thin gold wire fixed together at the wide end with a pinched narrow bronze sheet creating a ridge.  A slit is cut into the form from the edge to the center.  At the center is a cylindrical piece of sheet gold that can rotate freely.
Function:  these were probably worn as hair ornaments by a wealthy or powerful member of society.  A lock of hair could be pushed through the slit of the cone and the aligned cylinder.  The lock of hair could be fixed in place by rotating the cylinder out of alignment.
Decoration: decoration of the piece is achieved in the very thin and delicate spiral created by the gold wire, as it spirals from the center of the cones outward.  The edges of the pieces are polished.


Technique:  the cones were made by coiling thin gold wire over a cone form.  The wire was soldered together to create a ridge cone structure.  Each cone was then cut to allow for the slit.  The cones were joined with a band of sheet gold pinch around the edges.  A cylindrical tube also with a slit was placed at the center and can move freely.  The band and the cylinder were made from gold which was hammered into a sheet and cut to size.
Location: Gorteenreagh, Co. Clare 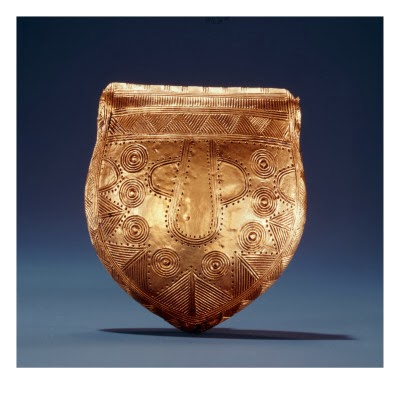 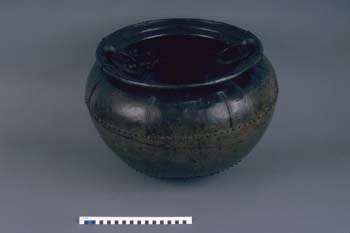